Frans Hegge: „Haha, everyone asks that question. To keep it simple: an industrial designer takes care of the design and functionality. That a product is usable in practice. But also that it can be manufactured by machines, because otherwise the craftsmanship remains and that is unaffordable. In this respect with the TakeOff you can think of the exterior parts for example: they have to be made with moulds, in order to be able to make them with a hundred pieces at a time. But an industrial designer is also responsible for ensuring that the roof section seals properly, that it does not bend and that it fits in well with the other parts.“

DWH: „And then it has to look nice as well…“

Frans Hegge: „That’s the best part of our job. After all, an industrial designer also makes sure that the design of the product looks sleek and timeless. For the entire process of industrial design, we have not only our knowledge and experience, but also various computer programs, for example to convert 2D drawings into 3D, but also to be able to calculate weights and strengths in advance. For the roof of the TakeOff, but also for the gas springs that carry the roof, for the hinges, for everything. All in all, there are hundreds of parts and they have to be lightweight and robust, everything has to fit perfectly together and all parts have to result in a stiff construction.“

DWH: „And then theory has to fit in with practice?“

Frans Hegge: „That’s the most important thing, of course. What rolls out of the computer is 80-85 percent accurate. But I don’t need to explain to you how much energy that last 20 percent costs: that’s real trial & error. That’s why you have to build prototypes. To check if everything works as it was considered beforehand. So that you can dot the i’s and cross the t’s here and there and refine and adjust certain parts just a little bit before everything goes into production. That’s why our design studio is also involved in prototyping – that’s also part of our work. Over the past few months, we and our team have been in the workshop several times, together with the TakeOff team and the other people involved. Hands on and like a well-oiled machine, we’re all busy with screwdrivers, drills, you name it. „Together everyone achieves more“, that’s what it’s called. And then it’s nice to see how such a product develops: the first sketch starts, so to speak, on the back of a beer mat, resulting in the final product. The TakeOff will be really beautiful…“

DWH: „What makes TakeOff so special?“

Frans Hegge: „I have been involved in the design of many caravans in the past. At Chateau, Home Car, Delta, Cabby, Beyerland, Lunar, Kip… But this is really different. It’s not a caravan and it’s not a tent trailer. The TakeOff is really a crossover in between and the user-friendliness is just enormous. Behind the car it is a compact trailer and on location you simply click it open, like the trunk of the car. Maarten and Rikus have come up with this ingeniously. During the development phase we really focused on the 30 seconds target. Half a minute, that’s all. Then it has to stand. The TakeOff really has a surprise effect, whoosshh, open. And then you step into a compact, well… actually a caravan. Because it has all the functionalities of a small caravan, such as a T@b or a Kip Shelter. But with tent fabric walls, so you still have that camping feeling – much more than in a caravan. That’s why you feel at one with nature. The camping feel of a tent, the travel comfort of a trailer tent and the comfort of a caravan. That’s what makes it so special.“

Frans Hegge: „No, this is going to work, I have no doubt about that. So many people have worked on this product with so much experience in the camping industry… This is a truly unique device. Maarten’s nose is long enough to know what the market is looking for. And I don’t mean a niche market that you’re going to sell ten pieces of, but really something that nobody has thought up yet and for which there is a market. The TakeOff is a product that really stands out, that goes with the times. You pick it up and you’re gone. To Normandy, the Belgian coast, to Zeeland (Dutch coast), you name it. It’s actually a very stubborn car: small behind the car, but with a large volume as soon as you open it. You have to see it to be able to believe it.“ 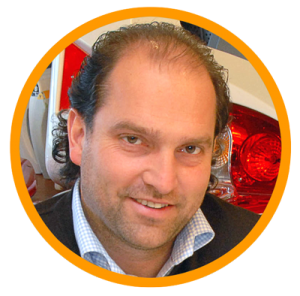