Ready for TakeOff: 5, okay then:
6 questions to Dennis Tiethoff

DWH: „Prototype builder? Missiles, cars, airplanes and then something about camping?“

Dennis Tiethoff: „No, I’ve been working in the caravan industry for twenty years. I have been a mechanic, production manager, workshop manager and now I hire out my own company to dealers for more complex jobs. And I build camper vans: fully customised, for demanding customers. And of course I am…“

Dennis Tiethoff: „Hahaha, yes indeed. We all know each other from Kip: Maarten, Rikus, Frans… Together with them I developed and built caravans for 9 years. And that’s what I like most about this whole project, old boys network, with the benefit of building something completely new, something that isn’t there yet. It’s not a tent trailer, it’s not a caravan…“

DWH: „Yes, right. But what does a prototype builder do?“

Dennis Tiethoff: „Actually very simple: everything is conceived on paper and finally worked out on the computer to produce the latest 3D-cadcam calculations. But only in practice you see whether it works as intended. From the first bolt to the end product: here in the workshop we put everything together from scratch and of course you encounter things that need to be solved: the fit of the different parts must be perfect, the adjustment of the folding mechanism, we test here whether the strength of the various parts is okay, for example with the steps. Those kind of things. Improvements that will have to be completely streamlined in the production process later on. And it’s all about weight, isn’t it? We don’t like wobbly boxes. It has to be sturdy, but lightweight. And everything is documented and described; prototype building is actually mainly about making sure that the assembly process runs smoothly in the future.“

DWH: „And what were the biggest challenges?“

Dennis Tiethoff: „The biggest challenge was the hinge system of the roof. It must work flawlessly, also in combination with the tent fabric that we use for the sides. And we succeeded. And besides that, the adjustment of the gas springs was quite a feat. They make it easy to open and close the roof. That also works flawlessly. And then the entrance: the TakeOff has a small door at the rear which incorporates entrance steps. You use it so often – it must be indestructible. And, of course, there are funny details, such as the removable kitchenette with quick release fasteners for gas and water, and the licence plate lighting in the roof of the TakeOff that can also be used as entrance lighting when you’re at the campsite.“

DWH: „And what do you think of the TakeOff, as a caravan and van builder?“

Dennis Tiethoff: „I find the ease of use really bizarre: you give the roof a push and it stands. Within thirty seconds it’s ready for use. The TakeOff really adds something. To the world of folding trailers and to the world of caravans. I also like those modern trailer tents, you know: tough look, robust. But that looks especially good behind a Landrover, nice and straightforward. But this is completely different. A nice streamline, really contemporary. In terms of weight it even fits behind a Volkswagen Polo and the ease with which it can be set up is second to none. And on the campsite you have the same comfort as a caravan: a fridge, kitchen, toilet… And that enormous bed of 2.05 by 1.60 metres: you won’t easily find that in the caravan world. I really see people switching from a caravan to the TakeOff. Why would you drive a heavy car all year long if you can do it that way?“

DWH: „And soon it will be at the Camping & Caravan Fair. That’s only a few days left – will you make it?“

Dennis Tiethoff: „Yeah, I’ve never missed a deadline. They’re ready here – two of them, complete, both in different colours. We have made long days: from 6 am to 10 pm! But fortunately I didn’t have to do everything on my own – we all worked very hard on that. And they did a real good job. I am very curious what people will think of the TakeOff at the fair. And after Utrecht, I’d first like to sleep late for a few days, haha!“ 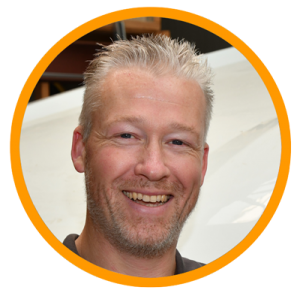